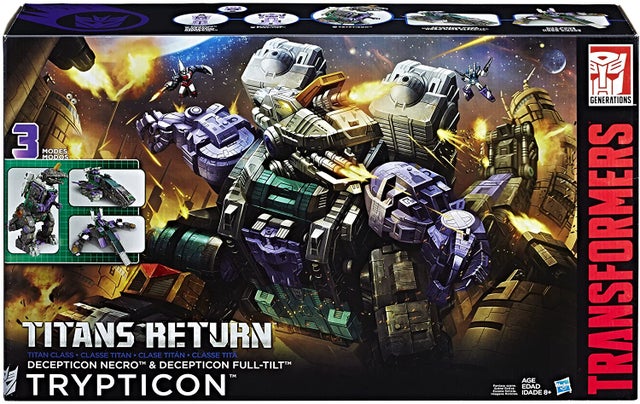 Trypticon will destroy everything and devour everyone in his path. The Titan Class Trypticon figure is the largest figure in the 2017 Titans Return universe and is also the biggest Decepticon figure ever made at 18 inches tall!

The towering T-Rex converts between 3 different modes: dino, spaceship, and city. When he is in city mode, he connects to Titans Return Leader Class figures (each sold separately) to form the giant Nemesis Command base. When he is in T-Rex mode, he can "eat" Titan Master figures: Trypticon can chomp them down, then you can open his stomach to get them out.

Trypticon comes with a Deluxe Class Decepticon Full-Tilt figure and a Titan Master Decepticon Necro figure. The Full-Tilt figure attaches to Trypticon's chest when in tank mode. The Titan Master Necro figure becomes the head for Full-Tilt's robot mode, and works with all Titans Return Deluxe, Voyager, and Leader Class figures. Trypticon also features a storage compartment in his tail.

Additional Titan Master figures are each sold separately, but with so many to collect, the Titans Return battlefield is a veritable all-you-can-eat bot buffet for Trypticon!

Due to Hasbro packaging on the product, there will be some potential wear around the edges/corners, but no major dents/ding/crushes on the box (unless specified). Pictures are available upon request